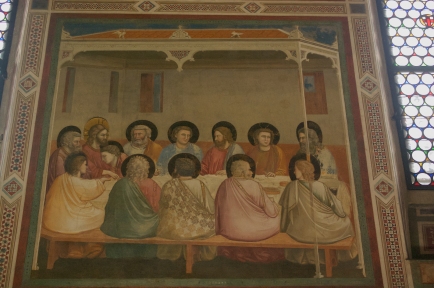 The Baptism of Jesus Christ by John the Baptist

The Ride into Bethlehem

The Betrayal of Christ by Judas

The Marriage at Cana

Bringing Christ down from he Cross

Massacre of the Innocents 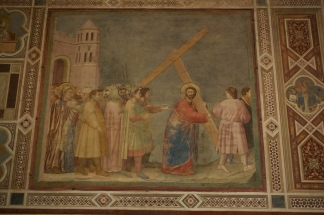 Carrying the Cross on Cavalry

The Manger Birth of Christ

During a recent stay, in Padua, Italy, I marveled at a seemingly enchanting light hovering over this very old city, going back before Roman times, a place where many layers of culture and history are available to feast the mind.  In particular are the lives of two famous artists, who made their stay in Padua. Giotto lived there in the 14th century, and Donatello, in the 15th.  Another artist named Mantegna must not be forgotten, when speaking of Padua.  He was a prominent painter, who lived in this city dedicated to St. Anthony, the hermit.

So surprised at the amazing light of Padua and the similarity I found in the tones and colors in the frescoes of Giotto, I made mention of this to acquaintances along the way.  I’m not sure if they understood what I was trying to say.  While there may be a scientific explanation for this phenomena, real or imagined, I sought out information on Google and was pleasantly surprised that a French writer in his book Wanderings in Italy also spoke of the quality of light in Padua.  Although he was there in the fall and I in the early summer, more than 100 years apart, it was quite a revelation that we both were struck by the relationship of the light and the effect this had on its artists, particularly its painters.  Gabriel Fauré, nonetheless had a differing perception of the nature of Paduan light. He said, “Forms stand out in strong relief. The lines of the Euganean Hills, so soft and blurred as seen from Venice, are so precise and definite here that they almost hurt the eyes.”  He then mentioned the art of Giotto and Mantegna as being influenced by this surrounding atmosphere.  Contrarily, I found the light to be soft and pastel like and conjured more closely the images of Giotto’s palette.  Mantegna is quite different in style and true enough his palette is more saturated and his forms have a more outlined and definite quality than those of Giotto.  Perhaps Giotto painted in the early summer, and Mantegna in the fall.  Whatever may be the case, I’m not certain scientific explanation can prove either case, but it could try.  It may also depend on the season, in which one resides.  What is true is that human perception of nature’s affect on artistic renditions, open to interpretation, cannot be denied.

In the beginning of the article, I have included photos I took of the frescoes by Giotto from the Scrovegni Chapel in Padua.  Below, is also the script of Faure taken from his travel journal in Italy.  It is worth a reading to understand what his experience was like and its parallel with my own experience.  Click on Scrovegni Chapel for an excellent tour of the inside of the chapel, and explanation by the Khan Academy.

The environs of Padua are delightful. ‘If we did not know,’ said the Emperor Constantine Palæologus, ‘that the earthly Paradise was in Asia, I should have believed that it must have been in the territory of Padua.’ I am struck more especially by the change in the aspect of everything only a few leagues from Venice. Climate, landscape, sky and inhabitants are all quite different. The light, above all, is of another quality. It is not full of colour and vapour as on the lagoon, but vivid and piercing. Forms stand out in strong relief. The lines of the Euganean Hills, so soft and blurred as seen from Venice, are so precise and definite here that they almost hurt the eyes. And merely walking along this road enables me to realize why the vision of the Paduan painters differs so essentially from that of the Venetians with whom they were long classed. The School of Padua is far more akin to that of Florence, whence, indeed, came the two great masters of the 14th and 15th centuries whose influence was to be so decisive here. Giotto and Donatello did not feel themselves strangers on the banks of the Bacchiglione, and they were at once understood and imitated. Nothing could be more alien to the art of Titian than the somewhat hard dry manner of Squarcione and Mantegna.[1]

A recent visit to Stillwater revealed new and exciting discoveries.  Even though I came here many times before it was easy to skip over details of the city, as I was busy going back and forth across the river, to be with my aging mother.  Now she is gone, but not forgotten, for she taught me to see from the heart.  She would like my pictures.

Stillwater is a place I love to explore, with my camera, especially in the morning and early evening.  Please see the photos individually, and read the captions I wrote.

White flower on a sunny morning on my walk.

I called this the gnome house because when you get closer there are gnomes all over the yard. I got very good vibes from this house.

The Art of Writing. These old boxes looked so lonely, in a row. They belonged to a lonelier looking set of apartments. Seemed to be almost vacated.

Quite proud of this picture, I had to venture into the side yard of someone’s property to get it. Hope they don’t mind. Many of the pictures came out blurred but this one was the magic moment. Here you can see the paddle boat coming up river. Behind it is the new bridge, almost in completion. This new bridge should slow the traffic which now pours through the downtown of historic Stillwater, to cross over into Wisconsin.

In flight. Got to get there some how.

Found this hydrant. Just in case of fire.

Some drying flowers along the fence of Fairview Cemetery.

A view of the old lift bridge and grain mill. This bridge will soon be part of a State Park and converted into a walk and bike way, when the new bridge downriver is inaugurated. Should happen in just a few days.

On a trolley tour the driver told us that these square houses were for the ‘River Rats’ or the men that worked on the The Boom. Rarely did they bathe thus came the name. Many of them perished in the dangerous work of logging dams. The history of the lumber business is fascinating, and created an environment where the Lumber Lords lived alongside people of walks of life. It must have been a very vibrant city, indeed.

Abandoned house in Stillwater. I saw this house two years ago. It looks much the same as it did then. Not improved from its dismal state. Perhaps someone will buy it and give it a new face. This is common in Stillwater, as it is a desirable place to live, for many reasons.

Taken at dusk this renovated house. This style of house is abundant. I believe it is one of the older types of houses, lived in by the working class, who worked on the river boom or lumber yards.

A few years ago, I featured a page on Stillwater that barely scraped the surface. Have a look at what I found; https://tiffanycreek7.com/stillwater-minnesota/.

The date; Monday, June 12, 2017.  Place, London. Event; The Changing the Guard at Buckingham Palace.  Got there early to get our spot at the gates. Found a square on the pavement to perch ourselves, and peer through the bars.  Early, we arrived.  We had to stay put and hold on tight or others would come and try to usurp our position. The tourists flocked from all corners of London, to line up at the entrance of the Palace.  I chose to allow a few small children to stand in my place.  A cumbersome woman barged in, blocking their angled view to the inside.  I told her she was taking the children’s space.  She left.

The process of the event, from beginning to end, enraptured my spirit; the ongoing arrival of spectators, fueled by a desire to watch the colorful fanfare, the marching and playing of the Palace band.  Otherwise, the procedure was quite tiresome and boring, and a bit puzzling that so many would come and stand in the heat and humidity, for what felt like an eternity.  Yet, the allure and will to pay respect to the Queen and the Crown, she so regally bears, took precedent.  People from around the globe stood and looked on, and when it was all over the multitudes meandered away, as if nothing happened at all.  If I never see another changing of the guard, I will not care, as the young girl in the photograph may have felt.  Her shirt read, “Don’t Care.”

The band and the guard

Close up of a guard. He came around to the gates and said hello to everyone.

Young girl peering out as she holds on the bar. 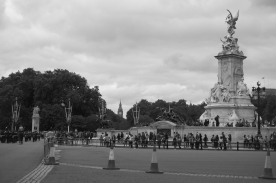 A view of the mall with Big Ben and other monuments.

One of the doors on the gate. The cat with the crown in the center is quite sinister.

Monument in front of BP.

The day of all days. The sun is shining, the oatmeal is cooking, the stomache is rumbling and waiting to be fed. Soon the food will feed the body and give the mind the energy to put ideas to work. Today is the day of all days!